A Brief History Of The Aston Martin Vantage

The name's Motors. Invictus Motors. We have yet another Aston Martin V8 Vantage in stock. This time a Onyx Black Roadster. To say she is a beauty is an understatement, but where did it all start?

Aston Martin can trace it's roots back to 1913. They was founded by Lionel Martin and Robert Bamford. The two had joined forces as Bamford & Martin the previous year to sell cars made by Singer from premises in Callow Street, London where they also serviced GWK and Calthorpe vehicles. Martin raced specials at Aston Hill near Aston Clinton, and the pair decided to make their own vehicles. The first car to be named Aston Martin was created by Martin by fitting a four-cylinder Coventry-Simplex engine to the chassis of a 1908 Isotta Fraschini.

They acquired premises at Henniker Mews in Kensington and produced their first car in March 1915. Production could not start because of the outbreak of the first World War, when Martin joined the Admiralty and Bamford joined the Army Service Corps. 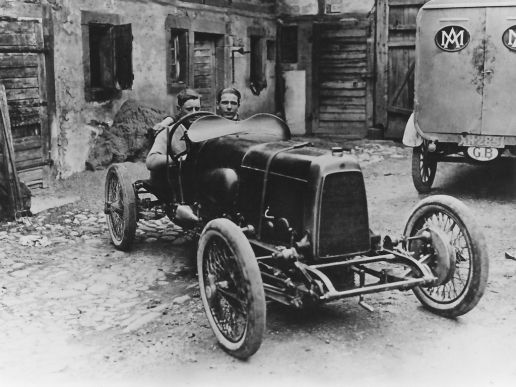 In 1947,  David Brown Limited bought Aston Martin. Aston Martin began to build the classic "DB" series of cars. In April 1950, they announced planned production of their Le Mans prototype to be called the DB2, followed by the DB2/4 in 1953, the DB2/4 MkII in 1955, the DB Mark III in 1957 and the Italian-styled 3.7 L DB4 in 1958. The DB4's claim to fame is it's appearance in the film The Italian Job, where it sadly gets destroyed by the Italian Mafia. 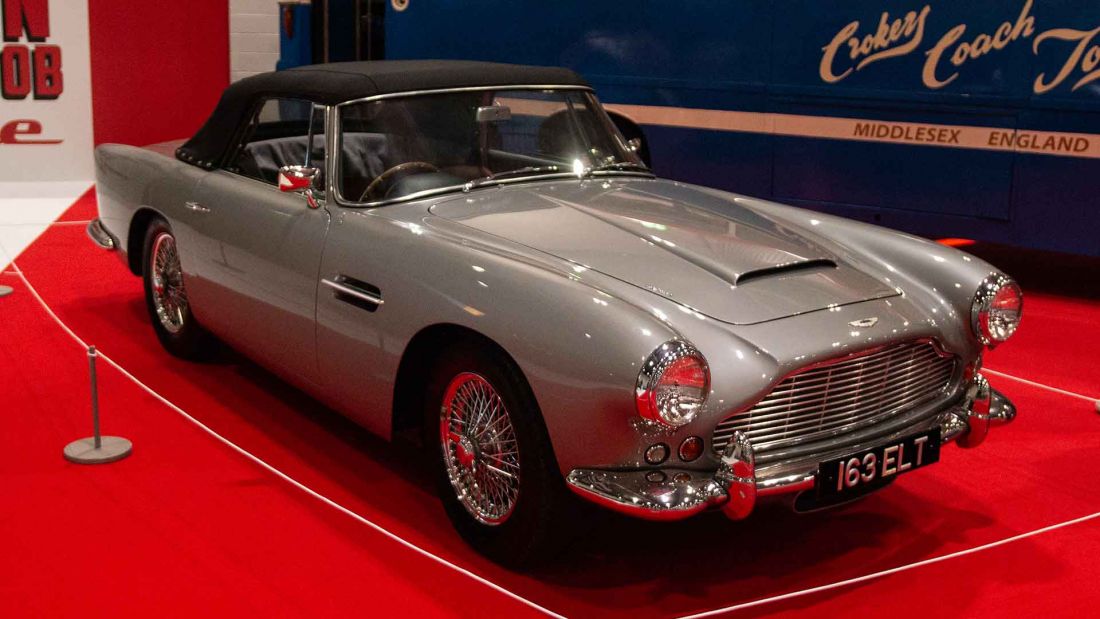 In September 1975, the factory, shut-down the previous December, re-opened under its new owner as Aston Martin Lagonda Limited with 100 employees and plans to lift staff to 250 by the end of 1975. In January 1976, AML revealed that it now held orders for 150 cars for the US, 100 for other markets and another 80 from a Japanese importing agency.At the Geneva Motor Show, Fred Hartley, managing director and sales director for 13 years before that, announced he had resigned over "differences in marketing policy".

The new owners pushed Aston Martin into modernising its line, introducing the V8 Vantage in 1977, the convertible Volante in 1978, and the one-off Bulldog styled by William Towns in 1980. Towns also styled the futuristic new Lagonda saloon, based on the V8 model. 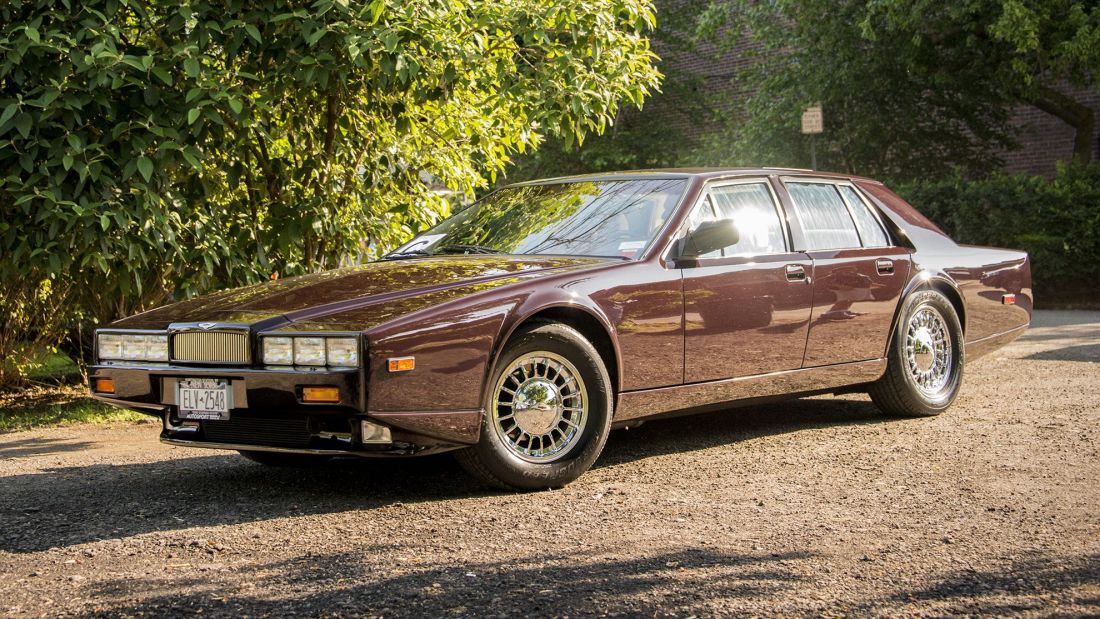 The Aston Martin V8 Vantage is a British grand tourer. It was hailed at its 1977 introduction as "Britain's First Supercar" for its 170 mph top speed. Its engine was shared with the Lagonda, but it used high-performance camshafts, increased compression ratio, larger inlet valves and bigger carburettors mounted on new manifolds for increased output. Straight-line performance was the best of the day, with acceleration from 0–60 mph in 5.3 seconds, one-tenth of a second quicker than the Ferrari Daytona. 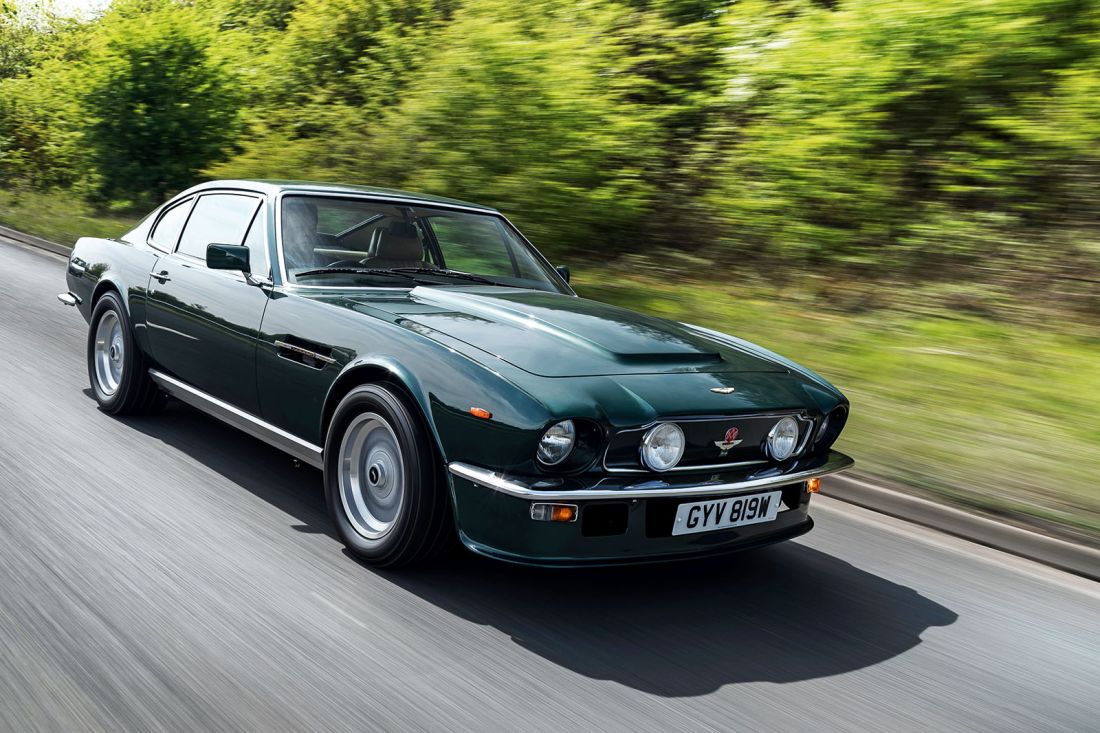 Based on the existing Virage, the next generation Vantage was first shown at Birmingham in September 1992, the Vantage was produced from 1993 through 2000 and, like many other Aston Vantage models would soon become the only variant available. The biggest change to the Vantage was inside the engine compartment. The 5.3 L V8 engine now used twin superchargers. Power output was now 550 hp, and the torque was equally high at 745 nm. Top speed was 186 mph, with acceleration to 60 mph taking 4.6 seconds. Customers cars could be returned to Works Service starting in 1998 to be converted to V600 specifications, where the engine was upgraded to 600 hp and 813 nm of torque. 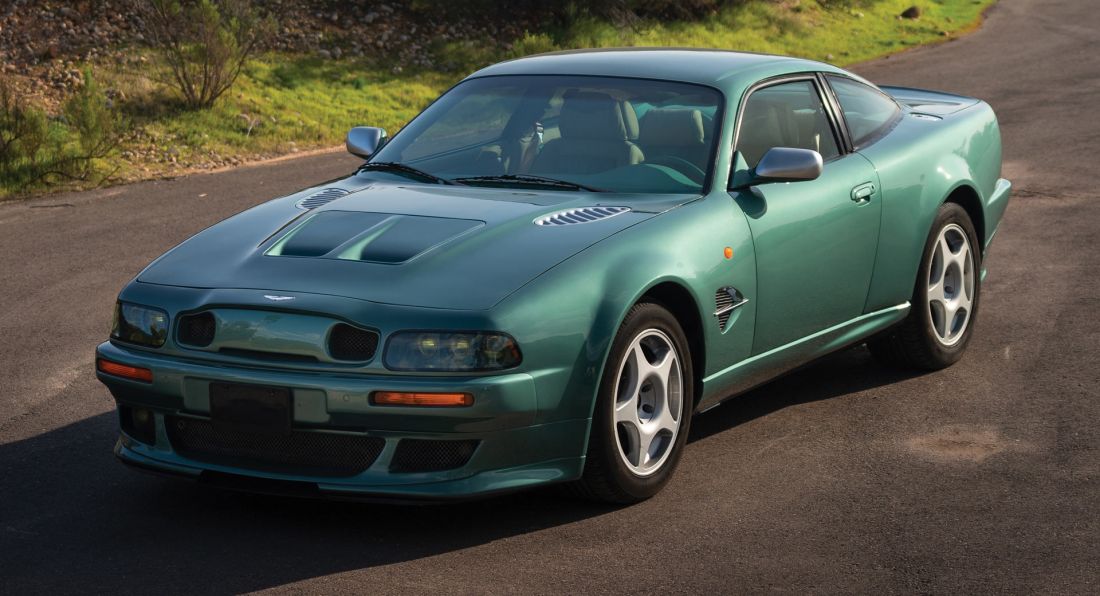 Aston Martin has previously used the "Vantage" name on high-performance variants of their existing GT models. The modern car, in contrast, is the leanest and most agile car in Aston's lineup. As such, it is intended as a more focused model to reach out to potential buyers of cars such as the Porsche 911, as well as the exotic sports and GT cars with which Aston Martins traditionally compete. Following the unveiling of the AMV8 Vantage concept car in 2003 at the North American International Auto Show, the production version, known as the V8 Vantage was introduced at the Geneva Motor Show in 2005 for the 2006 model year. The two-seat, two-door coupé had a bonded aluminium structure for strength and lightness. 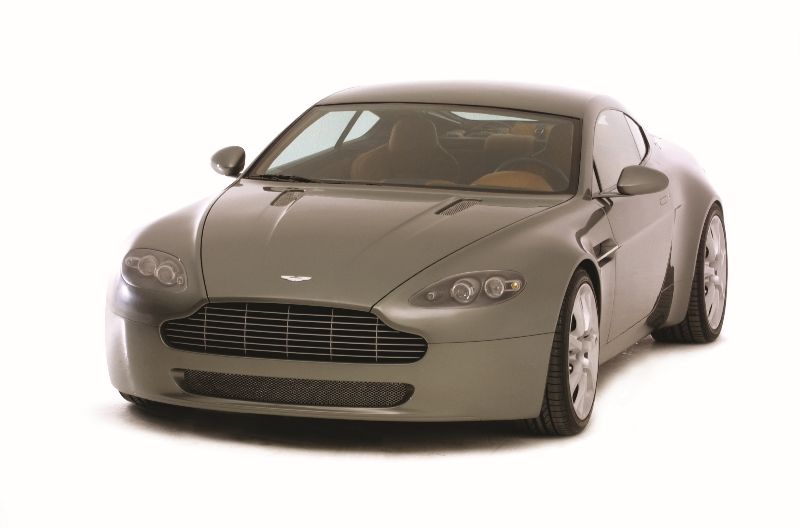 The V8 Vantage was initially powered by a 4.3-litre quad-cam 32-valve V8 which produced 380 bhp and 409 nm. However, models produced after 2008 had a 4.7-litre V8 with 420 bhp and 470 nm of torque. Though based loosely on Jaguar's AJ-V8 engine architecture, this engine was unique to Aston Martin and featured race-style dry-sump lubrication, which enabled it to be mounted low in the chassis for an improved centre of gravity. The cylinder block and heads, crankshaft, connecting rods, pistons, camshafts, inlet and exhaust manifolds, lubrication system and engine management were all designed in house by Aston Martin and the engine was assembled by hand at the AM facility in Cologne, Germany, which also built the V12 engine for the DB9 and Vanquish.

The engine was front mid-mounted with a rear-mounted transaxle, slotted Brembo brakes were also standard. The original V8 Vantage could accelerate from 0 to 60 mph in 4.8 seconds before topping out at 175 mph. 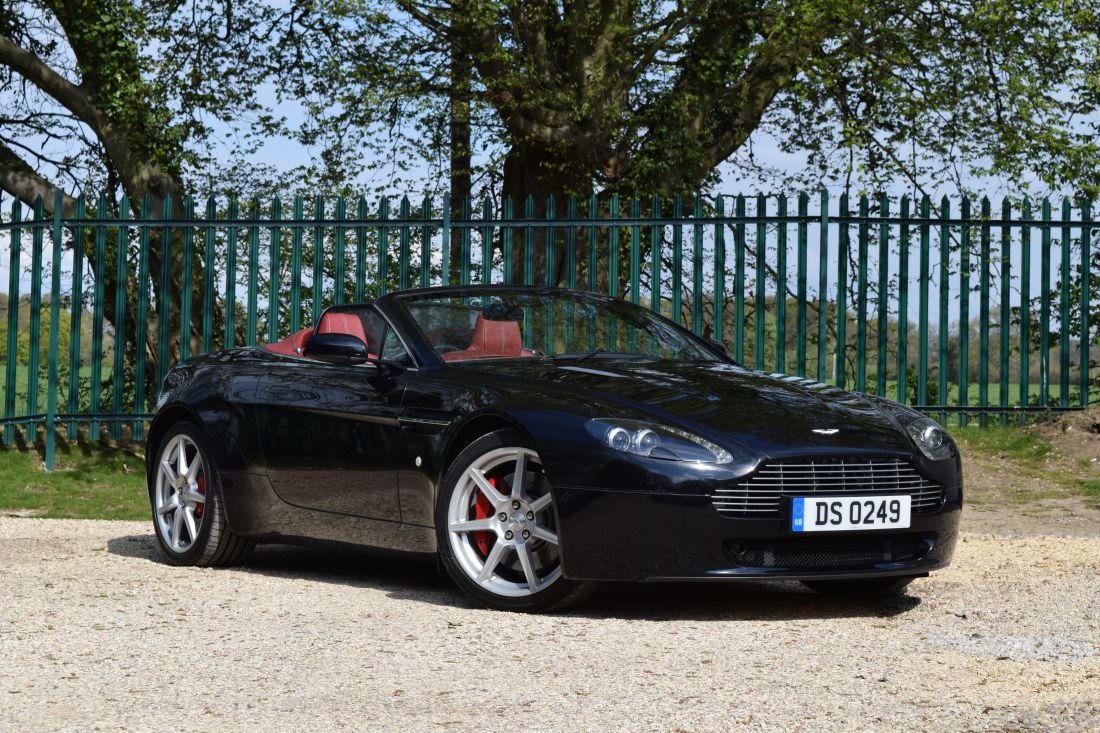 The current generation of Vantage uses the powertrain and infotainment technology from Mercedes-Benz, like the DB11. The Vantage uses Mercedes-AMG's M177 4.0-litre twin-turbocharged V8 engine that has a power output of 503 hp and 685 nm of torque as is equipped with the Mercedes COMAND system. The Vantage is capable of accelerating from 0–62 mph in 3.6 seconds, and attaining a top speed of 195 mph. The Vantage uses a rear-mounted 8-speed automatic gearbox, and will be the only vehicle that offers the option to pair the Mercedes-AMG V8 with a manual transmission. The Vantage is also the first Aston Martin production car to feature an electronically controlled differential with torque vectoring, and is built around the same all-new bonded-aluminium platform as the DB11, although around 70% of its components are said to be unique to the Vantage. 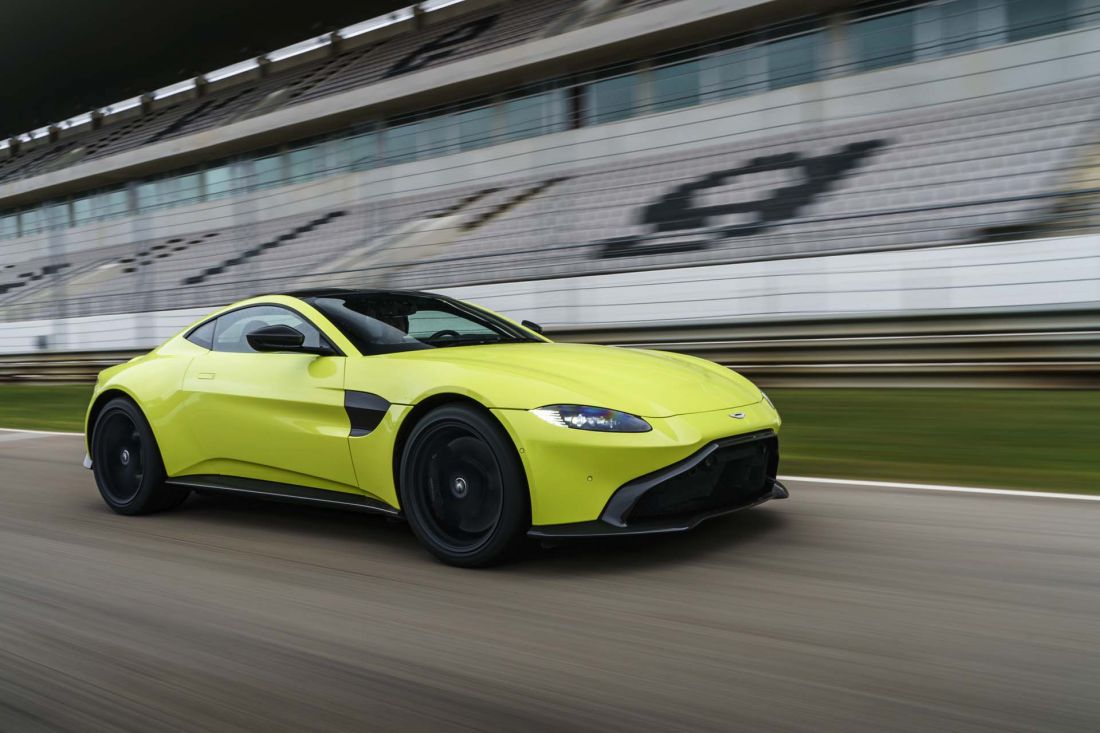 This Aston Martin V8 Vantage Roadster is currently for sale on our website for £39,995.